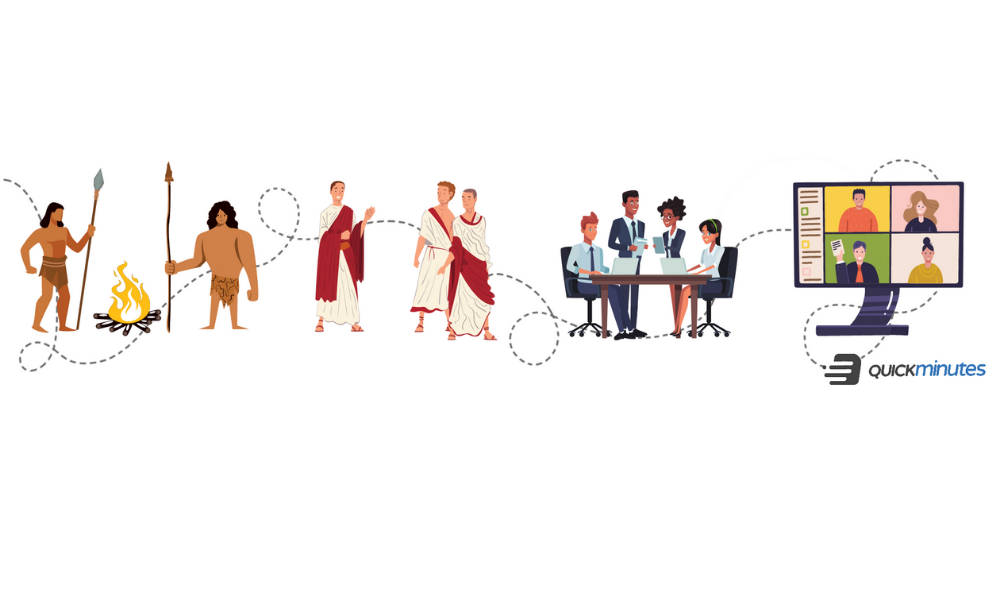 Meetings that changed the world

While it's difficult to pinpoint precisely when the idea of ‘meetings’ started, it merits seeing that people began gathering in broad daylight places or market squares trading thoughts since the early ages. By 600 B.C in Ancient Greece, courtesy to the advancement of exchange and new developments, each significant city had an Agora - meaning a "meeting place", or later a "marketplace". The Agora was a public area, generally in the centre of the city. Individuals used the Agora primarily for trading; however, the result of any such occasion's central capacity was discussion. The subjects may be political lecturing or normal tattle, the philosophical ideas were also talked about widely.

Meetings in the Agora were generally casual with informal environments, comparable to the contemporary lunch break chatters at workplaces. The speakers regularly spoke before a major group, asking them inquiries to incite decisive thinking on life matters. A great deal of the world's unmistakable methods of reasoning was brought into the world from those gatherings and keep on influencing our day to day routine today. A notable result of such effective meetings was the concept of ‘Democracy’, an idea the world enjoys till date.

Investigating the beginnings of the meeting culture, we can see the extreme changes gatherings have gone through to arrive at their present structure.

Three meetings that changed the world

Meetings between iconic figures in politics, music, science and technology have contributed vastly to the dynamic of current society. Highly impactful meetings leave an influence that lasts many generations to come.

Winston Churchill, Franklin Roosevelt, and Joseph Stalin were an odd trio with differences quite stark from each other. During WWII, ‘the Big Three’ met in Iran in 1943 at the famous Tehran Conference. During that meeting, many important decisions regarding their military strategy against Germany and Japan were solidified, including the Americans’ commitment to launch ‘Operation Overlord’ in May 1944 and invade northern France. Eventually, the three unlikely allies went on to win WWII.

The first National Women’s Liberation Conference was held over the last weekend of February 1970. They intended to discuss history. Instead, they made it. In 1969, a young academic called Sheila Rowbotham and a group of students from Ruskin College, Oxford decided to stage an event discussing new scholarship about the lives of women in the past. When they realised how little was being done, they rewrote the agenda. Like so much from that decade, 1970s feminism has become the subject of 21st-century nostalgia.

The founders of Apple Inc. met in 1971 when Wozniak was in college and Jobs was still in high school. In an interview from 2007, Wozniak is quoted saying, ‘a friend said, you should meet Steve Jobs because he likes electronics and he also plays pranks.’The two bonded over their shared interests and went on to co-create one of the most revered, influential brands in technology.

Breaking out of the office: The digital meeting revolution

Meetings form a crucial part of work culture. According to the National Statistics Council, 37% of employee time is spent in meetings. However, 47% consider excessive meetings as a waste of time, so much so that they might go back in time to abolish the seed from which the idea sprung. Your meeting culture goes hand in hand with your company culture. How you manage meetings sets the tone for everything else.

Many executives feel overwhelmed by meetings, and no wonder: On average, they spend nearly 23 hours a week in them, up from less than 10 hours in the 1960s. Additionally, the meetings are often poorly timed, inadequately coordinated, or both.

We can all joke about how excruciating they are, but that pain has real consequences for teams and organizations. Every minute spent in a wasteful meeting eats into solo work that’s fundamental for creativity and efficiency. This is why defining your company’s meeting culture becomes crucial.

Why does the meeting culture matter?

The manner in which you oversee meetings shapes your culture (and the other way around). Meetings rejuvenate culture, enhancing both the upsides and negatives within an organization. How you want your culture to perform is implanted by the way you conduct your meetings. Studies show that meetings hugely impact not just productivity, yet additionally, on the culture and environment of the company – they even assume a vital role in promoting inclusivity.

Your meeting culture is a byproduct of your broader company culture – they must work inseparably. Another issue with the badly run meetings is the stiff price companies pay as an opportunity cost. For example, it was noted that dysfunctional meeting behaviours, including wandering off-topic, complaining, and criticizing were associated with lower levels of innovation and employment stability.

Throughout our history, humans have attempted to make meetings more efficient in lesser time. In many ways, thanks to the rapid development of technology, we now have many tools to help create better messages and make them easier to share to many platforms and different audiences. However, without a legitimate understanding of the purposes, the audiences, and the absence of information to carry out the right methods, we incidentally create dreadful meetings that encase the audience's minds and drain their energy. To create a successful meeting is to establish an environment where all the voices are being heard and creativity flows. In estimation, people spend 30% of their time in meetings every day. If you have to do it, make it worth.

The importance of effective meeting management

You can upgrade to enterpise, or use the basic plan for free.
Free forever upto 10 users.

Get Started
SEE PRICING FOR TEAM OF 10+ USERS